Our ongoing commitment to providing outstanding patient care means we are implementing a new electronic patient record system. You may notice our processes take slightly longer than usual, and we apologise if this causes any inconvenience. Thank you for your understanding and patience. 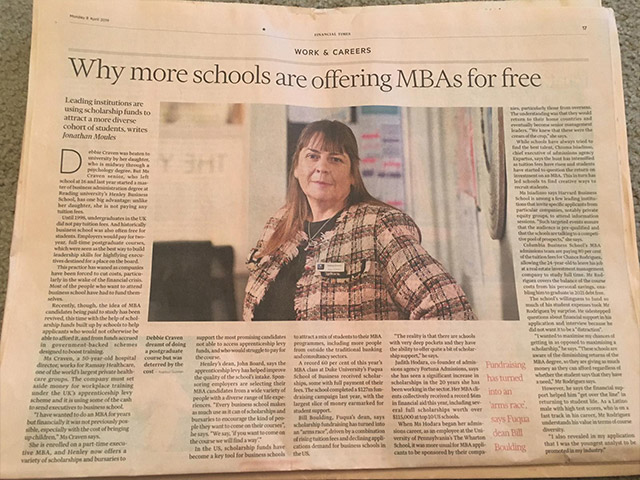 In November 2018 Debbie Craven commenced a part time executive MBA studies at Henley Business School. The course was sponsored by Ramsay and funded via the apprenticeship levy scheme.

Earlier this year Debbie was contacted by Henley and asked if she would agree to be interviewed by a journalist from the Financial Times in regards to the MBA, in particular the apprenticeship angle.

After a gruelling 2 hour phone interview and a 2 and a half hour photo shoot located in nearly every department at The Yorkshire Clinic Debbie eagerly awaited the publication.

Finally she was famous!

On Monday 8th April the article appeared in the Financial Times, a quick trip to the newsagents was required to pick up several copies.

‘I must say although very proud to have made it into the paper the article had a certain ‘spin’ on it and I was surprised that after taking at least 1000 photos this was the best they had!

Interesting though I posted it on LinkedIn and received many likes and comments which is great for promoting Ramsay’s development opportunities.’