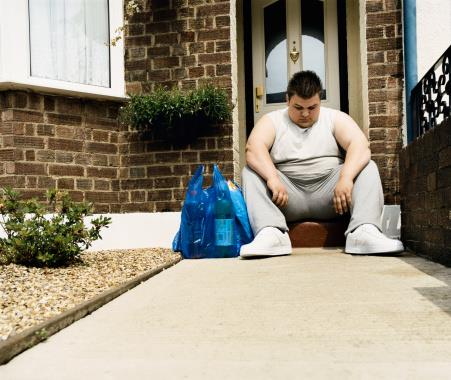 Overweight and obese people judge distances as being further than they actually are, according to a new US study.

Tests from Colorado State University found people who weigh 23 stone see objects as being twice as far away as a 9-stone person.

In the study, 66 people of varying weights were asked to estimate how far away a traffic cone was placed.

While the cone was 25 metres away, those weighing 9 stone guessed its distance as 15 metres, while volunteers weighing 23 stone estimated it as 30 metres.

A similar effect was also noted for hill gradients, with overweight people typically perceiving a hill to be steeper than someone with a normal BMI.

Volunteers were asked to rotate a line on a card to match the gradient of a hill in front of them.

While most people over-estimated the steepness, the effect was greater in overweight or tired people.

The effect could be part of a survival mechanism that has been passed down from our ancestors as a way to judge situations and how we are able to handle them in an instant.

It is a conscious perception of the world, says Psychologist Dr Jessica Witt, but one we cannot influence. She says people can’t simply will themselves to see a distance as shorter.

The same distorted perceptions are also seen in people carrying heavy loads, such as backpacks.

Dr Witt says people don’t see distances or hills as they actually are; they see them through the effort required to complete the walk or climb.

Presenting the results to a meeting of the American Association for the Advancement of Science, Dr Witt was asked whether a solution for obese people could be to wear telescopic glasses. He says this would give them an easier target to start with.

The results could undermine current attempts to tackle obesity, she adds.

The ‘perceptual biases’ mean obese people see a world that is impossible to navigate, and therefore are less likely to be active.