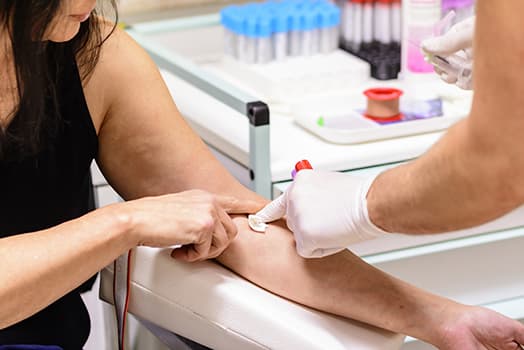 Scientists have developed a revolutionary blood test that could soon be used to determine whether people are at risk of Alzheimer’s disease and other forms of dementia.

In a study of thousands of blood, brain and muscle samples, researchers were able to identify hundreds of genetic markers associated with good health at the age of 65.

These were then used to come up with a scoring system that can be used to measure healthy ageing, which in turn could help to determine an individual’s risk of dementia.

The test was trialled over 12 years with more than 700 people aged over 70, whose healthy ageing scores varied significantly, with higher ratings linked to better mental ability and improved kidney function.

But in findings that could have huge implications for the way dementia is treated, lower scores were found to be associated with Alzheimer’s.

By examining genetic “messengers” known as RNA that carry instructions to protein-making elements within cells, the test can be used to get insights into levels of genetic activity.

Writing in the journal Genome Biology, the researchers said that in patients who had been diagnosed with Alzheimer’s, RNA readings were usually altered.

First of its kind

This test is the first to provide a measure of how well someone is ageing and it is hoped it could help identify middle-aged individuals suitable for clinical trials of preventative Alzheimer's treatments.

Scores were not found to correlate with common lifestyle-associated conditions such as heart disease and diabetes.

Lead researcher Professor James Timmons, from King's College London, said: “We use birth year, or chronological age, to judge everything from insurance premiums to whether you get a medical procedure or not. Most people accept that all 60-year-olds are not the same, but there has been no reliable test for underlying 'biological age'.

“Our discovery provides the first robust molecular 'signature' of biological age in humans and should be able to transform the way that 'age' is used to make medical decisions. This includes identifying those more likely to be at risk of Alzheimer's, as catching those at 'early' risk is key to evaluating potential treatments.”