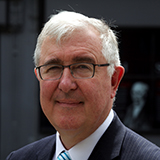 Professor Byrne is currently the President and Principal at King’s College London, and will be relocating to Sydney from London.

Professor Byrne began his career in Adelaide after graduating with first class honours from the University of Tasmania in 1974 and subsequently trained as a Neurologist in both Adelaide and London. He was a founding director of the Melbourne Neuromuscular Research Unit and the Centre for Neuroscience in 1993. He has made major contributions to research in the field of mitochondrial medicine and neuromuscular disorders.

Professor Byrne has served as Head of the Medical School and Vice Provost of University College London (2007-2009) and was the President and Vice Chancellor of Monash University (2009-2014). He is a fellow of the Royal Australasian College of Physicians, the Royal Colleges of Physicians in London and Edinburgh, The American Academy of Neurology and The American Neurological Association. He is also a fellow of The Academy of Medical Sciences in the UK and an honorary fellow of the Australian Academy of Health and Medical Sciences which he helped found.

Professor Byrne has been providing expert advice to Ramsay Health Care UK during the COVID-19 pandemic.

Ramsay Health Care UK’s CEO Dr Andy Jones said: “I am delighted that Professor Byrne is joining the Global Executive Board to continue to drive the organisation’s high quality healthcare agenda. Professor Byrne’s guidance and consultation has been invaluable to the UK Executive Team during the current pandemic.”