The genetic marker that could signal spread of cancer

A genetic marker has been found that could be an early warning signal that breast cancer will spread to the brain.

The patterns of genetic markers, or ‘switches’, are chemical marks that turn genes on or off. Research presented at the National Cancer Research Institute Cancer Conference found a handful of genes with faulty switches. 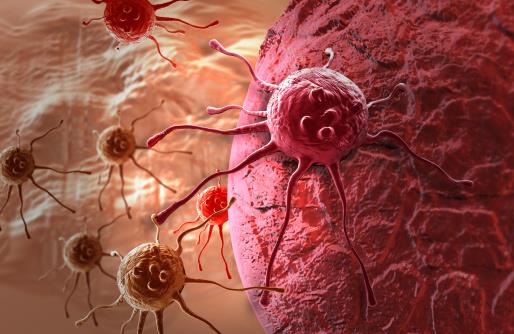 The researchers studied 24 breast cancers that had spread to the brain, along with samples from the original breast tumour.

By comparing chemical switches, known as ‘DNA methylation’, between the original breast cancer and the secondary brain tumour, the researchers were able to narrow down from 120 potential candidates switches to find  a ‘signature’ for cancers that had spread.

Two of the genetic switches became faulty early on in the development of breast cancer, suggesting they may be the early warning signal for tumours that will spread to the brain.

The scientists are now working to develop a blood test that might be able to detect these signals at an early stage, before the disease has spread.

One in three spread

Up to 30% of breast cancers will eventually spread to the brain, often years after the first tumour was treated.

Tackling secondary brain tumours with radiotherapy and surgery has limited success with most women surviving just seven months after the brain metastasis has been diagnosed.

Study author Dr Mark Morris said that each year the number of women whose breast cancer spreads to the brain is increasing and while many of the genetic changes behind breast cancer are known, little is known about why the disease can spread to the brain.

There’s also potential for the findings to be used as a starting point to develop treatments that might prevent the spread.

Each year almost 50,000 women are diagnosed with breast cancer in the UK and around 11,600 die from the disease.

Dr Abeer Shaaban, member of the NCRI Breast Clinical Studies Group, said that tackling the problem of brain metastases is one of the greatest challenges facing breast cancer researchers.

He welcomed the research as an intriguing new angle to explore which underlines the importance of understanding how genes are controlled as cancer grows and spreads.