Can skinny jeans damage your health?

Skinny jeans could be causing nerve damage to its fashionable owners, according to new research.

Squatting for extended periods of time in the tight fitting jeans can cause damage to both the muscles and nerve fibres in the leg. 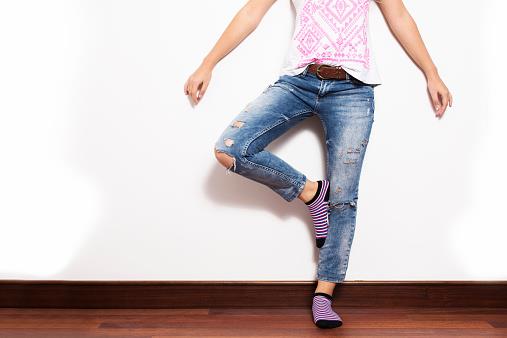 The findings were revealed in a case study of a 35 year old woman.

She spent several hours squatting to empty cupboards in skinny jeans while helping a relative to move house.

After noticing pain in her legs, she collapsed when she got home and was unable to move for several hours.

The woman was forced to spend 4 days in hospital to recover and to find out what had caused her temporary paralysis.

The women in the case study,  published in the Journal of Neurology, Neurosurgery and Psychiatry, said she felt the jeans were getting ‘increasingly tight and uncomfortable’ throughout the day.

When she returned home, she started to feel numbness in her feet and had problems walking. She tripped and was unable to get up again for a number of hours.

Doctors cut off the jeans as her calves had swollen so much they were unable to remove them any other way. She had no feeling in her lower legs and could not move her ankles or toes.

After examining the woman, the doctors discovered damaged muscles and nerve fibres.

She had developed something called compartment syndrome, where muscles swell because of a lack of blood. The swelling compresses nearby nerves.

The doctors put the damage down to extended periods of squatting, which was made worse by her tight jeans.

Doctors said they had not seen skinny jean related injuries like this before, though had recorded lesions of the thigh caused by the tight trousers.

Priya Dasoju, professional adviser at the Chartered Society of Physiotherapy, added that the woman was unfortunate and the case an extreme one.

However, she warned that if you do decide to wear skinny jeans you should avoid remaining in one position for too long.